John Loudermilk has written over 1000 songs, of which he recorded and released about 100 on his own albums. Another 250 songs were recorded and released by other artists.
So many unrecorded, unreleased songs are left. Some have been made as demo, but haven't been used. Some have been chosen by artists to record, but the recording is still unreleased. A few of which later emerged on later cd compilations. Some have been copyrighted for BMI and published on sheet music, but apparantly no released recording exist. See my page unknown songs for a few of those published but not recorded/released titles.

So still many, many Loudermilk songs are left unpublished. To be found in the vaults of recording companies and music collectors all over the world. Judging by the few I have heard so far, a lot of great music well worth to be released is still hidden. On this page a small sample of those little hidden jewels. 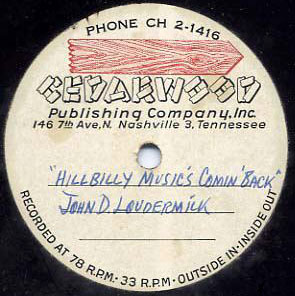 Hillbilly's Music's Comin' Back is a song John recorded as a demo for Cedarwood Music Publishing. Probably a 1958 or 1959 recording.
I was lucky to be able to obtain this record on eBay. The song title on the label (see scan) is in John D's handwriting. On the paper sleeve is written "Owen" and "Grandpa Jones". So probably this song was intended to be used by Owen Bradley (Nashville producer for Decca records) for a session with hillbilly singer and comedian Grandpa Jones. But Jones did not release it and may actually never have recorded it. A good uptempo song, with interesting lyrics:
Every time you played your radio
There's some darn fool a-jumpin'
Up and down and grindin', bumpin'
Makin' like a wore-out rooster tryin' to crow....
John definetely switched from rock to country, back then!

Listen to a sample of Hillbilly Music's Coming Back (±1958). 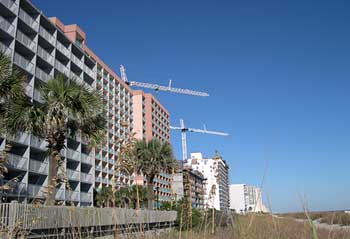 The Myrtle Beach Blues is another catchy uptempo song with interesting lyrics.
Myrtle Beach was the seaside spot where young kids from Durham often went. Here George Hamilton IV debuted as a singer.

Picture left: Myrtle Beach today: another beach spoiled with Costa Brava building style. The song comes from an acetate for Acuff-Rose publishing, with the song Do You? on the other side. So it probably dates 1968, may be intended for John's LP Suburban Attitudes or George's LP Gentle Country Sound.

The lyrics remind a little of Sunglasses, enumeration of items of sun, sea and beach, along with sense of having lost his love ("Linda was her lovely name").

Listen to a sample of Myrtle Beach Blues (±1968). Very grateful to Tapio Vaisanen for having supplied this song!

Note: the North Carolina Blues band Tommy Black & Blooz recorded a "Myrtle Beach Blues" on their 2003 album Beach Music.... But this is not the Loudermilk composition.

Around 1980 Loudermilk recorded in the UK a bunch songs that have not been released so far. Basically they seem to be intended for a follow-up album of the LP Just Passing Through.
Some of these recordings seem to have entered the bootleg-market. I was lucky to get a few of these tracks but don't ask me for it, ain't gonna spread them any further. I hope the album will eventually come out.

What I have heard of it, these are cheerful, gentle songs with the familiar touch Loudermilk's humour, with some spicey cajun and caribbean musical ingredients. Well worth to get released!


Back to my Loudermilk Songography
Mail